Welcome to my Poetry Page, where I will be posting some of the poetry I’ve written over the years and including some of the resources I’ve found especially useful.

I used to hate most poetry. I found it pretentious, didn’t understand the fuss. I was also turned off when we studied poetry in English class. After spending what seemed like WEEKS dissecting a one-sentence poem about red wheelbarrows, just the word “poetry” made me want to run screaming out of the room. Then my librarian friend, Rand Bellavia, showed me some poems that I actually quite liked and even moved me. I started seeking out poetry. And after a while, I could even enjoy poems like the one about a red wheelbarrow (see the end of this page for some of my favourites). I try to read at least one poem a day, either from Poets.org, from one of Garrison Keillor’s GOOD POEMS collections or The Writer’s Almanac.

I also started writing poems. I try to write a poem every day for my private journal; most of these will remain private, written just for me.

BUT I’ve also had some poems published in print and online venues, and even been (*gasp*) paid for them. I’ve also enjoyed participating in community poetry events like Robert Lee Brewer’s Poem-A-Day Challenge (also see his Poetic Asides blog). And I was honored to have one of Margarita Engle‘s wonderful poems as a creative prompt for my contribution in Colby Sharp’s The Creativity Project.

I’ll gradually be posting some of the poems I’ve written for young readers on this page as well as links to my free-print ready posters and worksheets. Also see Debbie’s Print-Ready Archives For Teachers, Librarians, Booksellers and Young Readers.

Though when I posted the above on social media recently, my friend Ame Dyckman replied with her own poem, which I’ve added to this image with her permission:

And some very short poems….

What if we both woke up one day
and found this was all a dream,
and that you were a marmot
and I was a flea.

Would you let me bite,
or would you scratch? 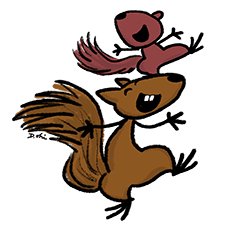 Debbie is currently available for virtual visits. Her presentations and workshops can be adjusted to suit all age levels, from kindergarten to college students to educators and other professionals.